How to tell if your property is Georgian, Victorian or Edwardian

Like most British cities, London has a mixture of architectural styles, from the elegant stucco-fronted Georgian homes surrounding Regent’s Park to the ultra-modern developments lining the banks of the Thames. But have you ever wondered what era your period home was built in? Today we’ll help you find the answer and discover whether your property is Georgian, Victorian or Edwardian. We'll also include some expert insights from London-based House Historian, TV history expert and author Melanie Backe-Hansen. 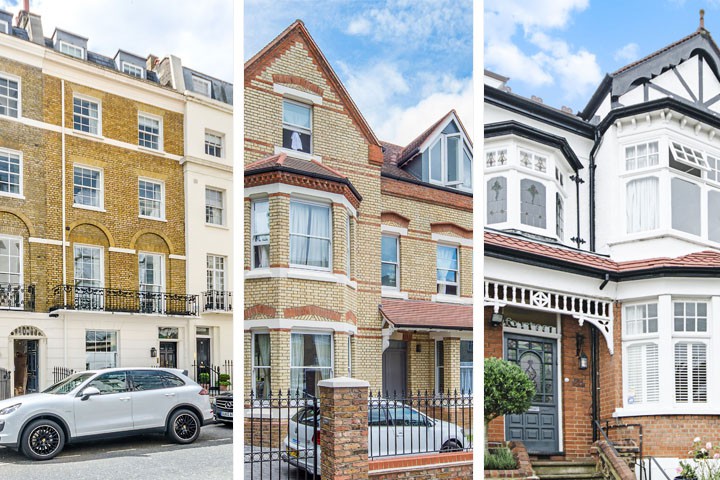 Properties built in this period, like those by famous London architects such as John Nash – who designed the original Buckingham Palace – were built to be spacious and comfortable, with grand proportions and a heightened sense of space and light.

This was in contrast to the smaller, darker architectural styles that preceded the Georgian era.

It was typical in the Georgian era for the first and second storey of a house to be occupied by the owner and their family, while the staff lived on the top storeys. This is why these rooms are typically smaller, with lower ceilings and smaller windows compared to the more elegant rooms at the bottom of the house. Kitchens were on the lower ground floor, away from the main house, as this was the servants’ domain. 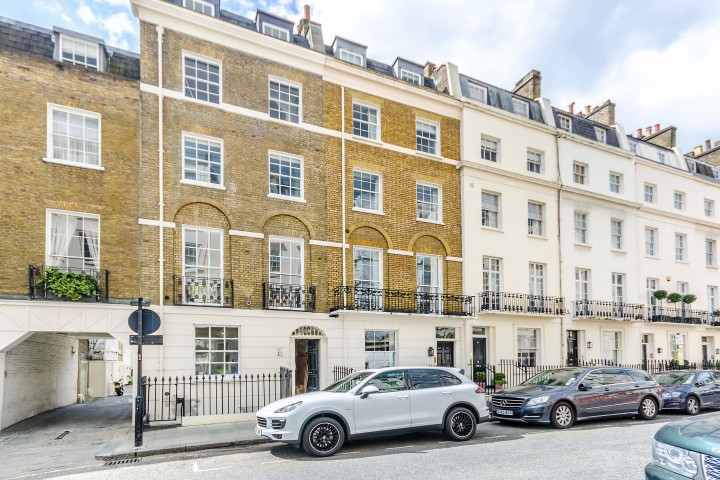 If you look closely at a Georgian property, often you will see something strange – a bricked-up window. This peculiar characteristic was caused by the window tax levied on homeowners between 1696 and 1851. The window tax was in the place of income tax – the more windows a home had, the bigger it was and the richer the owner.

So, to avoid paying higher taxes, many homeowners bricked up some of their windows to reduce the rate of tax they had to pay. Rather than reinstate the windows after the tax was lifted, many owners decided to leave the windows as they were. 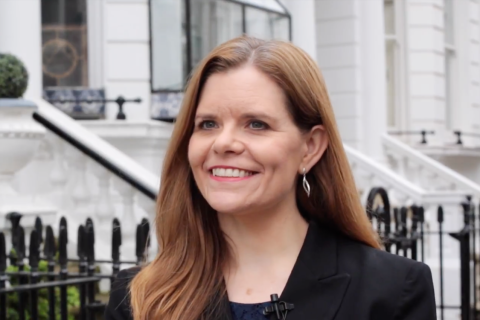 The Georgian period covers the reign of George I to George IV. Broadly speaking, it covers the 18th century and is generally identified by very simple facades. It is all about symmetry, and Georgian properties often appear quite plain. They are often built with brick and stone, sash windows, and later with stucco.

The Georgian period covers over 100 years, so there are many nuances within that time frame. Early in the 1700s they are simpler and then get more ornate. By the time you get to the Regency period, when the later King George IV was acting as Regent for his father, during the early 1800s, you’ve got far more decoration, with ornate iron railings and more decorative details on the exterior.

Inside, these properties have large rooms with high ceilings with some decorative features like ceiling roses and cornicing, which then rolls into the Victorian period. – M.B.H.

What are the main characteristics of a Georgian property? 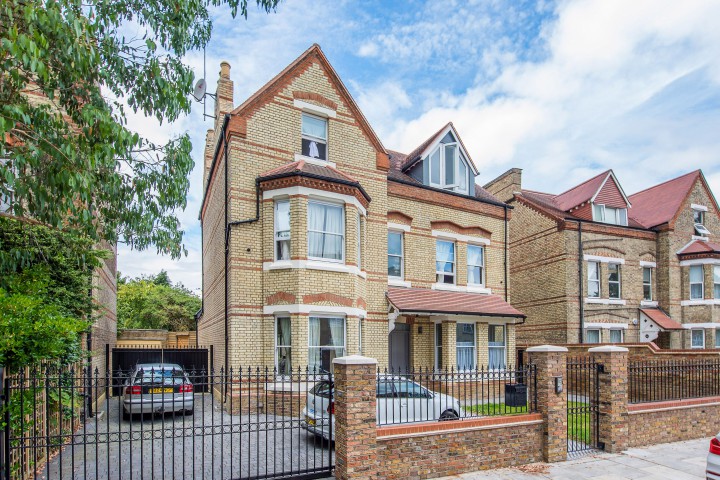 Ranging from 1837 to 1901 under the rule of Queen Victoria I, the Victorian period was a time of increased production of houses and an expanding middle class.

The majority of homes built before the Victorian period were owned by the gentry, or at least wealthy landowners, whereas wealth in the Victorian era was spread across society in the wake of the Industrial Revolution and houses became less grand and more accessible.

This meant that it was necessary to build more homes, which is why the Victorian period is characterised by rows of terraced housing on narrow streets.

Contrary to popular belief, terraced housing was commonplace before the Victorian era, with many Georgian properties in London built within a terrace. However, it was during the Industrial Revolution that there was a boom in terraced housing, including the ‘back-to-backs’ – these terraced houses were built close to factories for workers to live in and were erected cheaply and quickly, with no garden or proper sanitation.

Building of ‘back-to-backs’ became illegal in the late-19th century, which made way for the byelaw terraced houses that we see today, mostly in former industrial areas in the Midlands and the North of England. These byelaw terraces typically open straight out onto the street and are very simple in design.

Internally, high ceilings and large windows were a feature of Victorian homes, but the rest of the layout became a little bit cramped compared to previous Georgian designs, with a long and thin footprint. Often Victorian homes are one room wide, with a narrow hallway leading off into the different entertaining rooms, or two up, two down with just two rooms on each floor.

"The Victorian period covers the reign of Queen Victoria, from 1837 through to 1901"

The Victorian period covers the reign of Queen Victoria, from 1837 through to 1901. Again, that’s a very long period of time and house building within that period actually changed dramatically.

The style starts off quite simple, and then gets more decorative. By the end of the century, it’s gone from plain brick or stucco and sash windows to red brick and terracotta with decorative features.

Victorian houses can often appear with a mixture of external features as builders added flourishes depending on tastes, as well as the size of the house and the wealth of the residents. The Arts and Crafts movement inspired more ornate decoration, which then evolved into the Edwardian period, when Edward VII came to the throne in 1901. – M.B.H.

What are the main characteristics of a Victorian property?

Explore 10 beautiful Victorian homes for sale in London from £365,000. 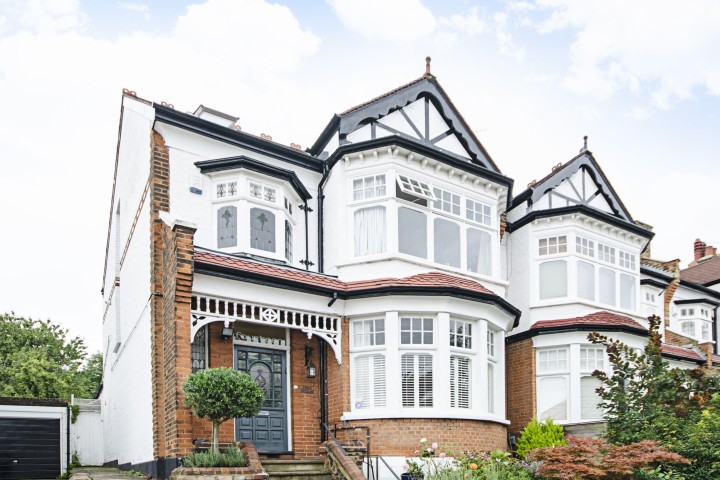 The Edwardian period from 1901 to 1910 was short and heavily influenced by The Arts and Crafts Movement. The movement promoted simple design and an appreciation for the handmade in retaliation to mass production in the Victorian age.

Following the boom in property construction during the Victorian era, Edwardian housebuilders were forced to build homes in the suburbs where there was more space, which created the ‘garden suburbs’, like that in Hampstead.

So, unlike the smaller, darker Victorian homes, Edwardian houses were more squat, wider and roomy, with bigger hallways and more windows.

It’s common for an Edwardian property to have a front garden and be set back from the pavement, as there was an ever-increasing desire for privacy at that time. Living rooms would sometimes have windows at both ends, covered by a small sloping roof on the outside.

Edward VII only reigned for a short time, certainly compared to his mother, Queen Victoria. In terms of housing the period came to an abrupt end with the outbreak of the First World War in 1914.

Edwardian houses are known for ornate decorative details, including floor tiles, stained glass, and timber, as well as large rooms with high ceilings. After the end of the war, the Interwar Period covered the 1920s and 1930s, leading up to the Second World War in 1939. – M.B.H.

What are the main characteristics of an Edwardian property?

After reading this article you should know the difference between Georgian, Victorian and Edwardian properties. But how well have you been listening? Take our quiz to see if you can guess when these homes were built or find out how much your house is worth.

To find out more about House Historian Melanie Backe-Hansen, read our interview with her, head to her website at www.house-historian.co.uk or follow her on Twitter: @HouseHistorian.