See what our fire-jumping and mud-crawling stars have achieved with their efforts to help our charity partners. 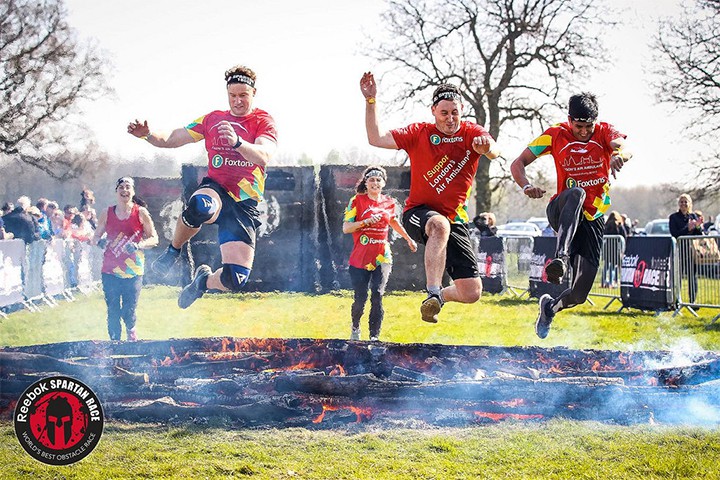 This year, Team Foxtons got extra-creative in their quest to raise money for our charity partner, London’s Air Ambulance.

"It's a beautiful, once in a lifetime experience," - Christopher Venter

Starting from March this year, our guys set off on a variety of incredible missions to help raise money for the life-saving charity – and there was no stopping them! Braving the tough weather conditions at -15C while conquering the impressive heights of Kilimanjaro, Tanzania, was Christopher Venter from our London Bridge office. It took Chris four nights and five days to accomplish the climb and the descent. Because of this achievement, Chris raised over £2,100 which he chose to split between two fantastic charities: London’s Air Ambulance and Scotty’s Little Soldiers.

“It’s a beautiful, once in a lifetime experience, made even more special by doing this not simply for personal achievement, but also for the benefit of others,” said Chris.

"The thought of our support for London’s Air Ambulance is most rewarding," - Ben Whittle

Following Chris’s success, our 11-strong team went to take on a different kind of challenge, conquering the Spartan Race this April. Not for the faint-hearted, this 5km obstacle course saw our team jumping over burning fire logs, climbing over walls and crawling through mud. This helped the team raise over £2,000 for London’s Air Ambulance, which is equivalent to the cost of one of their life-saving missions! Ben Whittle from our Notting Hill office was the first to cross the finish line with the impressive finish time of one hour.

And just last Sunday, two of our Willesden Green office champions, Oliver and Rossen, braved the London Marathon to fundraise for London’s Air Ambulance. Raising over £3,000 combined with donations still coming in, both finished the race in just over five hours.

“The emotion overall is impossible to describe,” commented Rossen. “The crowds cheering, the bands playing and everyone encouraging you to keep on going to the finish line – it is simply incredible.”

“I have to admit, it was tough, especially running with the injuries sustained during training,” added Oliver. “So I thought about all the people who had sponsored me, what the charity meant to me, the 5am waking ups to train in below freezing conditions and most importantly, my wife and our 7 months old baby, Poppy, waiting for me at the finish line.”

Well done to everyone in Team Foxtons for their efforts – but there’s also plenty more in the pipeline! Read our Central North Area Director Stuart Bennett’s tips on how to successfully organise your fundraising campaign as he prepares for Prudential RideLondon – Surrey 100, due to take place this summer.